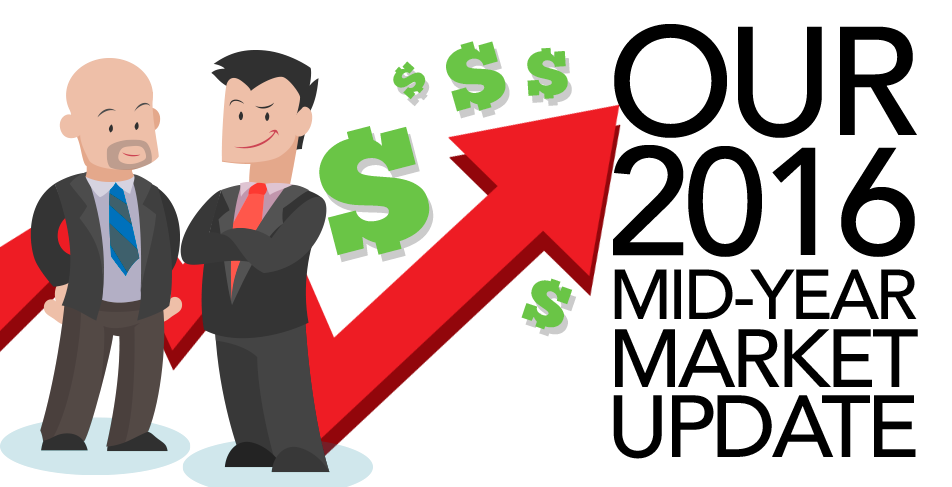 While 2016 began tumultuously, there are both positives and negatives when looking at the mid-year update and beyond. There are aspects of the economy that are still struggling, but also some areas that give hope for the rest of the year. For example, there have been no new negative developments in China, and oil prices increased slightly.

Major indexes started the year with drastic drops, then followed with solid rebounds, but as midyear approached, investors found themselves basically where they were at the beginning of the year. On the flip side, stocks and real estate seem to be overvalued, and what many see as short-term problems based on global events show profound issues that may affect the long-term outlook.

Overall numbers indicate that the economy may be leaving its first-quarter issues behind, but the economy is most likely in a recession. Manufacturing output declined for five consecutive quarters, which has never happened outside of a recession. Hiring moderated, but retail sales, personal spending, and inflation all picked up. What factors are currently driving the market flux?

Oil prices settled into a sweet spot of sorts; they were high enough to soothe market analysts, but not too high as to cause gas price spikes for consumers. Crude oil was just under $50 per barrel as supply disruptions and falling U.S. inventories reduced stockpiles, global demand firmed, and markets held out hope for an agreement on production cuts between OPEC and non-member producers.

Near the end of the month, statements from the Federal Reserve made it clear the possibility of a June rate hike was on the table. As the market digested the rising odds of one or more rate hikes this year, stocks at first dipped, then seemed to shrug it off as the major domestic indexes finished in positive territory. However, once news of Brexit broke, the increase was postponed.

Real Estate is Hot, But Not Necessarily Affordable

Real estate values remain stable. New home buying improved 16.6% in April to its hottest pace in eight years. March’s Case-Shiller 20-city composite home price index showed a 5.4% yearly advance, meaning home prices were rising more than twice as fast as inflation. But these numbers don’t mean that all is well with the real estate market. Affordability is worse than it was in 2006 and high-end luxury apartments in cities like New York City are seeing slashed prices.

Home values may be high, but homes in many areas are selling for tens of thousands over asking price with bidding wars common. This doesn’t bode well for buyers.

Generally, an election year brings market stagnation. But the problems with the U.S. economy do not appear to be short-term or only impacted by global events such as Brexit. The problems with our economy are deep and multi-faceted, including debt load, a declining manufacturing base, dismal capital investment, etc.

Beyond any unexpected events, the next shock will likely come from an increase in interest rates, which is becoming more likely as the economy recovers and inflation increases. An interest rate increase could cause stock prices to decline temporarily. Just because the mid-year update seems uncertain doesn’t mean that all is lost or that investors have nowhere to turn. Investors have many options in front of them, and we are always available to discuss these options and any other questions you may have.  Feel free to contact us today at (626) 529-8347 or email me at ricky@hbawealth.com.