"In economics things take longer to happen than you think they will, and then they happen faster than you thought they could"- Rudiger Dornbusch

It’s a new year 2015, and there is no doubt by now you have been subjected to the sybilline pronouncements up and down Wall Street. These oracular emissions come to us each year courtesy of the same group that missed the 60% drop in the oil price last year; the equally drastic fall in the Euro (or miraculous rise of the Swiss franc!); oh, and of course the crisis that put the financial world on life support. Not that we at Haydel Biel & Associates would fare much better. I mean, we are actually on record predicting a Seahawks victory in Super Bowl XLIX.

Ah, well. Life is complex. There are so many reasons why we fail at predicting. Usually it’s due to what Howard Marks of Oaktree Asset Management has termed a “failure of imagination”. He’s right, of course. Too often we stay in the warm and comfortable consensus, daring not to venture outside of the herd where it may be cold and lonely. It’s also so very easy to extrapolate an existing trend line.

Failing to imagine what could be, seems to us more of an error of omission. In some sense, this seems forgivable.After all, we all recognize that no one knows the future, not even (most especially?) those in the Mariner Eccles building.

But something far more insidious continues to goad us this New Year. Best thought of as “errors of commission” these mind-bending economic articles are appearing with greater frequency. None other thanBloomberg has chimed in to remind us why falling prices are a “bad thing”: “On the surface,” the article opens, “everything getting cheaper sounds like a dream come true. It’s not. The prospect is so terrifying that it’s prompted central bankers around the industrialized world to pour trillions of dollars into their economies to prevent a sustained drop in prices. The European Central Bank followed suit Thursday with a historic pledge to buy government bonds as part of an asset-purchase program worth about 1.1 trillion euros ($1.3 trillion).”

The article then goes on to convince us of the rightness of the foregoing statement by listing several reasons why we won’t benefit from everyday lower prices. And then comes the tell: “The sad thing is, even when prices are falling, the amount you owe doesn’t. Borrowers get crushed under the weight of that debt. In a mild scenario, companies and consumers hold back on other purchases to continue meeting their obligations. When things get really bad, they go bust altogether.”

Sad? For whom? I think that “borrowers” would happily walk away from burdensome debt rather than be “crushed by it”. To our ears this is not sad at all; except, of course, to the bankers who lent it. This is exactly what must happen to unsustainable debts.

The whole charade reminds me of the recent, inadvertently hilarious, “research report” from the St. Louis Fed. Cutting to the chase (and saving you precious time and brain injury) the Fed flatly states that one of the reasons that their unorthodox monetary policies have failed to ignite a recovery, is based in large part on consumers’ “willingness to hoard money”. You, see now? It’s all your fault! If only you had known that what we used to call “savings” is the root of all evil, you, dear saver hoarder could have been out stimulating the economy. But it’s not too late. Your ignorance has been banished.

It all seems so surreal. A mere 6 years ago the Fed and other central banks maintained that they were sworn to fight inflation. Hard to believe, I know. Following Lehman’s demise, up rose a new battle cry: Inflation is too low! Now Mr. & Mrs. Public must be re-educated to understand why no amount of inflation is too much! And as for all that hoarding—cut it out!

So our prediction for 2015 may seem an uninspiring one. We expect more radical, unsuccessful, & unorthodox financial “stimulus” from the world’s politicians and central banks. Ever more desperate to keep the game going for yet another year, we’ll also be exposed to more mind tricks so that we can be assured that these improvisations-cum-policies are working and that we simply can’t get enough of that good thing called inflation.

And while we recognize that this represents, perhaps, our own failure of imagination, we feel sure that we are on the precise path to proving to Ludwig von Mises’ observation that “There is no means of avoiding a final collapse of a boom brought about by credit expansion. The alternative is only whether the crisis should come sooner as a result of a voluntary abandonment of further credit expansion or later as a final and total catastrophe of the currency system involved." 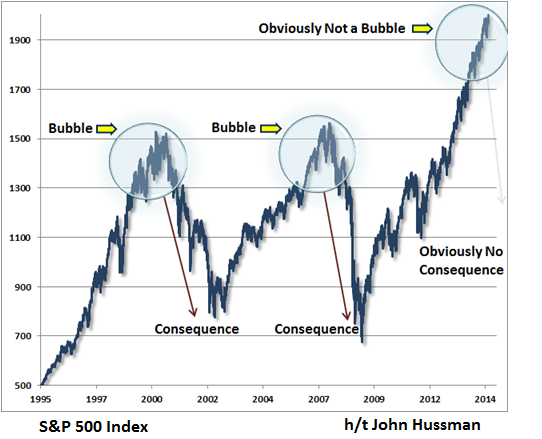 “Final and total catastrophe” seems to be the choice we are making: A recent survey from McKinsey & Company shows that since 2007, global debt has grown by $57 trillion. Yes, trillion. This is a compound annual growth rate of 5.3%. Global GDP has grown at a rate of about 2.1% per year over the same period, according to World Bank figures. This makes the pace debt growth more than double the pace of economic growth globally. The ratio of debt levels to GDP are now 17 percentage points higher than in 2008….and counting.

Canaries in the Coal Mine

Prices swoon. Not only have copper, lumber, aluminum, and iron ore all joined oil over the cliff, we can add to this global interest rates – or the price of money. Some have called this a supply problem. Others finger “low aggregate demand” as the culprit. But to us, the two are intertwined (what’s the sound of one hand clapping?) Most importantly, what’s this all telling us?

To us the “supply problem” is really the end-result of over-investment. Rapid expansion, made possible via waves of cheap borrowing (credit expansion), has occurred in many industries—but particularly in shale drilling—and now this has become painfully obvious. Shale drillers are the standout examples of what can go wrong with maladroit monetary policy. But wait, didn’t we all “know” that China was slowing…years ago? It all seems to reinforce economist Rudiger Dornbusch’s quote at the start of this letter. We all knew China was the marginal buyer of oil. We all knew China was slowing. We all knew US oil output had grown, adding 4.4 mbpd of production that wasn’t there 5 years ago. But still, the falling knife that is the crude price took us all by surprise. We don’t need Rudi Dornbusch to remind us that it will surely go further (& last longer!) than we expect it to. 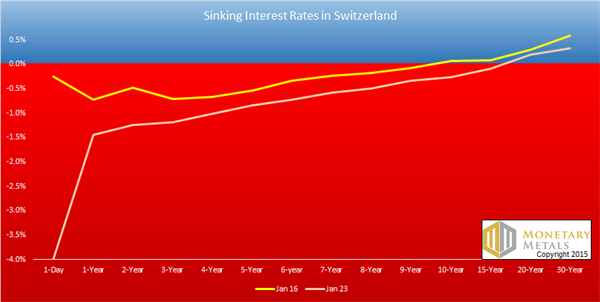 Interest rates are another case in point. 100% of economists surveyed by Bloomberg last year predicted higher rates. What did rates do in response? Why they fell like a stone. And it’s not just in the US where interest rates are hugging the ground. Interest rates are on the floor globally. Well, actually, the Swiss yield curve is subterranean- with negative interest rates out to 12 years (!) and Germany’s out to 9. In this Hall of Mirrors we call the investment markets; you can now pay these governments for the privilege of lending to them. They’ll hold your money and charge you for it! All kidding aside, though, an environment such as this, leads us to expect that the US Treasury bond rates will remain low and trend lower in the coming year. We also feel that should the US slip into recession, sub-1% for our 10 year bond (and by extension sub-2% for the 30 yr. bond) is likely to become a reality. And once again we can feel good about our prediction, since 71 of 71 economists polled by Bloomberg anticipate higher interest rates in 2015.

While industrial commodities tell the story of fading demand, some others have been bucking this trend. Gold prices are up 7% YTD and basically flat over 12 mos; Silver prices while down 10.75% over a year ago have strengthened notably in this young new year, +10.37% so far (all figures as of 2/3/2015). Since we have seen many false dawns with respect to the gold price, we’ll wait before declaring the next leg of an uptrend. However, we view these developments as encouraging. Also encouraging is the fact that interest rates have turned negative for many sovereign bonds (over 1/3 of interest rates globally!), which makes holding gold cost effective by comparison. There was a time when the opportunity cost of holding gold was outweighed by the income on offer from government bonds and other substitutes; no longer is this true.

We remain quite interested in opportunities that the low commodity prices are creating (oil field services, solar alternatives, etc.) we believe the best opportunities will come into sharper focus in the coming months, as the fallout from such low oil prices continues to be felt.

For now, we are thankful for the tailwind that falling interest rates have given to our portfolios. We are thankful for waking up to another year with great challenges ahead, and we are extremely grateful for your attention. Thank you for taking time to read this note. If you have any questions or suggestions, we’d love to hear from you.

Thanks again for reading.